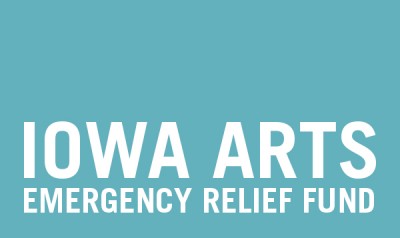 The following is a press release issued by the Iowa Department of Cultural Affairs on June 3rd, 2020:

Of the total 173 grants, 149 were awarded to Iowa arts, cultural and humanities organizations for emergency relief to support their operations and retain staff. The grants ranged from $1,000 to $18,000 based on the size of the recipient organization’s annual budget.

Applicants cited a range of financial losses stemming from cancellations and closures. Many cultural organizations reported losing out on revenue from admissions and gift-shop sales, as well as canceled classes, programs and fundraisers.

A recent survey conducted by Americans for the Arts showed that more than 340 Iowa arts and cultural organizations collectively lost at least $16.3 million since the coronavirus outbreak began. Another study, by the Iowa Economic Development Authority and University of Northern Iowa, revealed that arts, entertainment and recreation were among the hardest hit segments of the nonprofit industry in Iowa.

“Here in Iowa in a typical year, the creative sector accounts for more than 42,000 jobs,” Director Kramer said. “These CARES Act grants will help one of our state’s largest industries rebound in the weeks and months ahead.”

The Iowa Department of Cultural Affairs also partnered with the National Endowment for the Humanities to award an additional 24 grants to Iowa humanities organizations for special projects and programs. Here are a few highlights from the list:

In all, the department received 213 applications for these grants and made awards in 49 Iowa counties.

This marks the second and third round of grants from the Iowa Arts & Culture Emergency Relief Fund. During the first round, in April, the department awarded a total of $191,000 in grants to Iowa artists, creative workers and nonprofit arts organizations.

The Iowa Department of Cultural Affairs and its divisions – the Iowa Arts Council, the State Historical Society of Iowa, including the State Historic Preservation Office, and Produce Iowa, the state office of film and media production – empowers Iowans to build culturally vibrant communities by connecting to the people, places and points of pride that define our state. iowaculture.gov